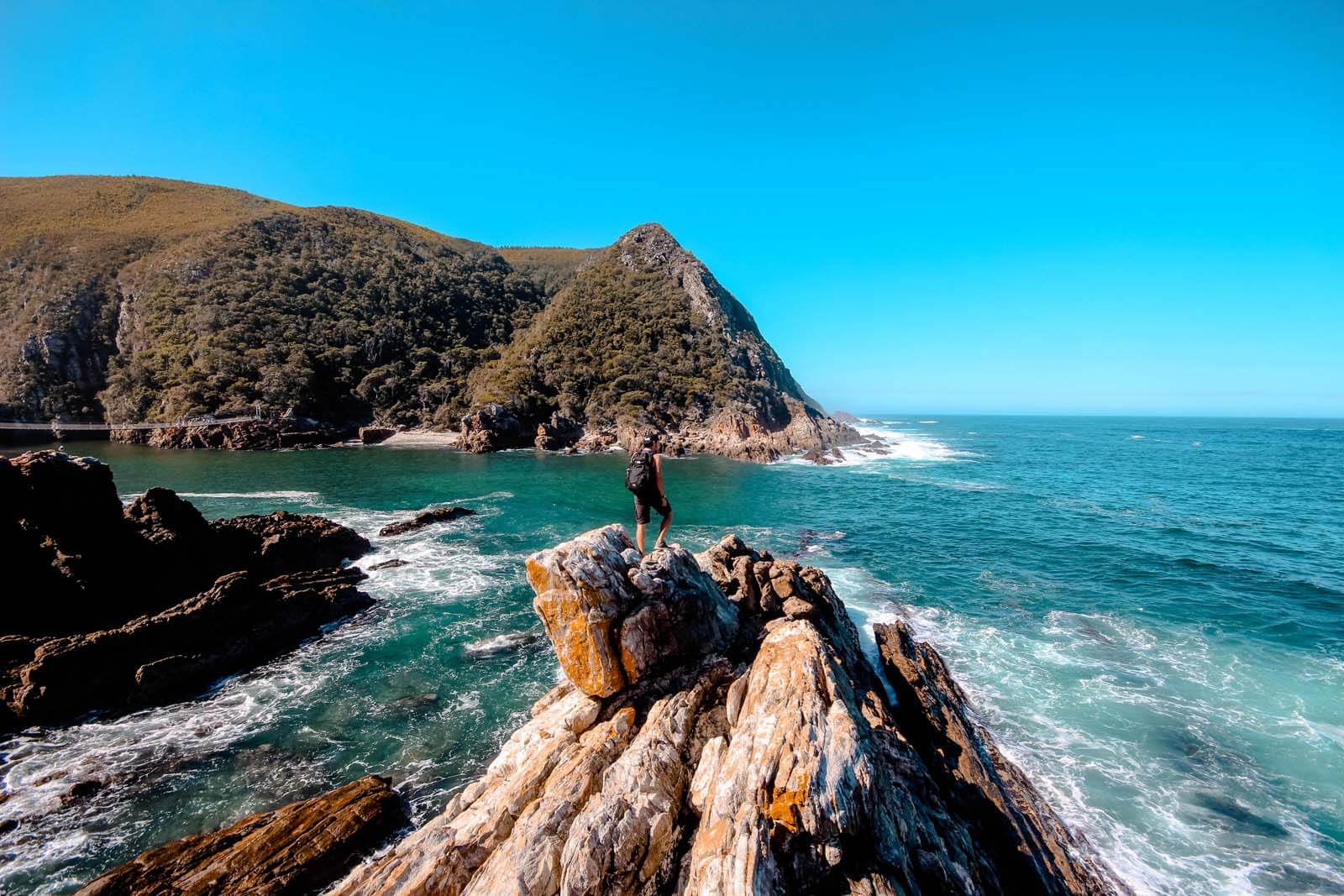 Since we arrived in South Africa, Ryan has been obsessed with the idea of experiencing a truly amazing Waterfall.

Setting off for the adventure we decided to head out to Storms river to Hike the famous Waterfall Trail at Tsitsikamma National Park. 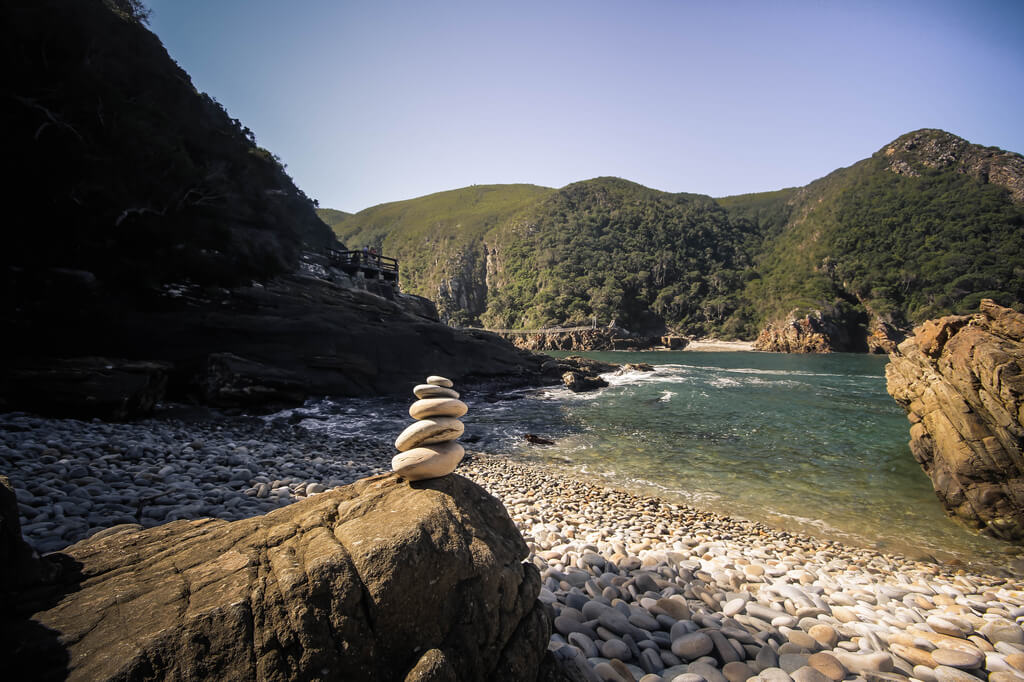 There is a well known hiking route, that you must book in order to participate in, this is known as the Otter Trail which follows the coastal line to Natures Valley.

We have experienced the Natures Valley Hike, and that made us want to tackle the initial aspect at Storms River.

The Waterfall Trail is the initial part of the walk. 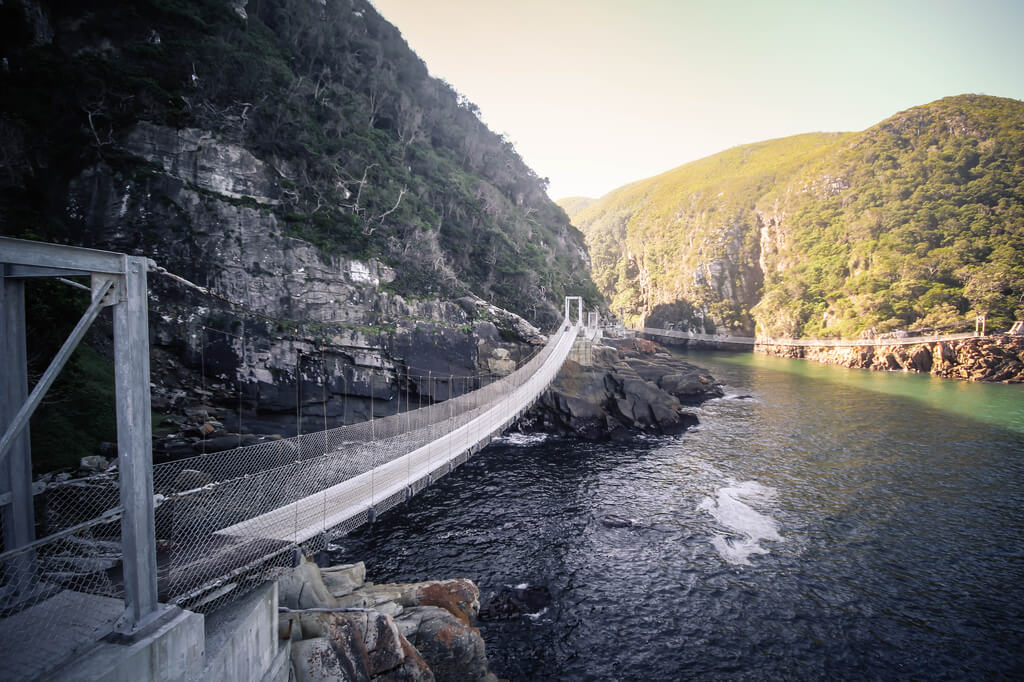 For us we did not have far to travel. Plettenberg Bay is the ideal location to start as a basis for exploring the Garden Route.

Whether you are heading towards George or the complete other direction towards Tsitsikamma it offers an ideal location for starting your adventure.

The drive is only a short one at approximately 1 hours drive, however be warned you will have to go through a Toll which charges (an ever increasing) fee.

More on Plettenberg Bay can be found on their website… Here

Or check out another post of ours from the area… Here 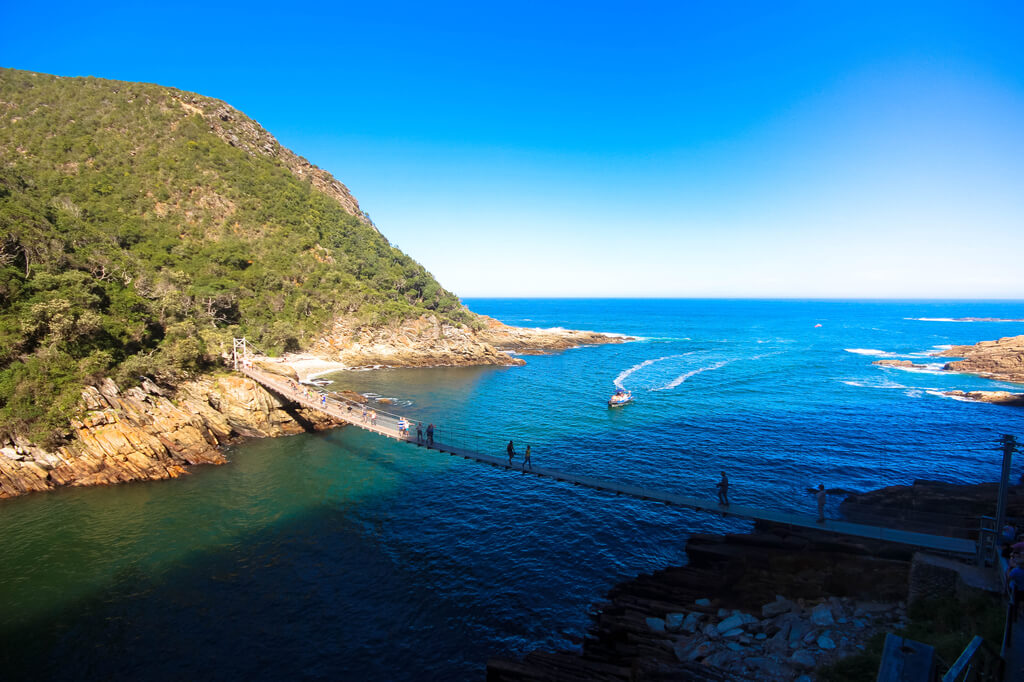 As we arrived we were greeted by the usual staff asking for an admission fee. Naturally making full use of our Wild Card we entered for free… Guys you so need one if you are visiting or staying in South Africa!

As we headed down to the Mouth of Storms River we offered a lovely guy a lift down.

Failing to hold in our excitement, as we got closer to the parking area, we wanted to just scream at how beautiful this place was!

Pictures DO NOT do this place justice! 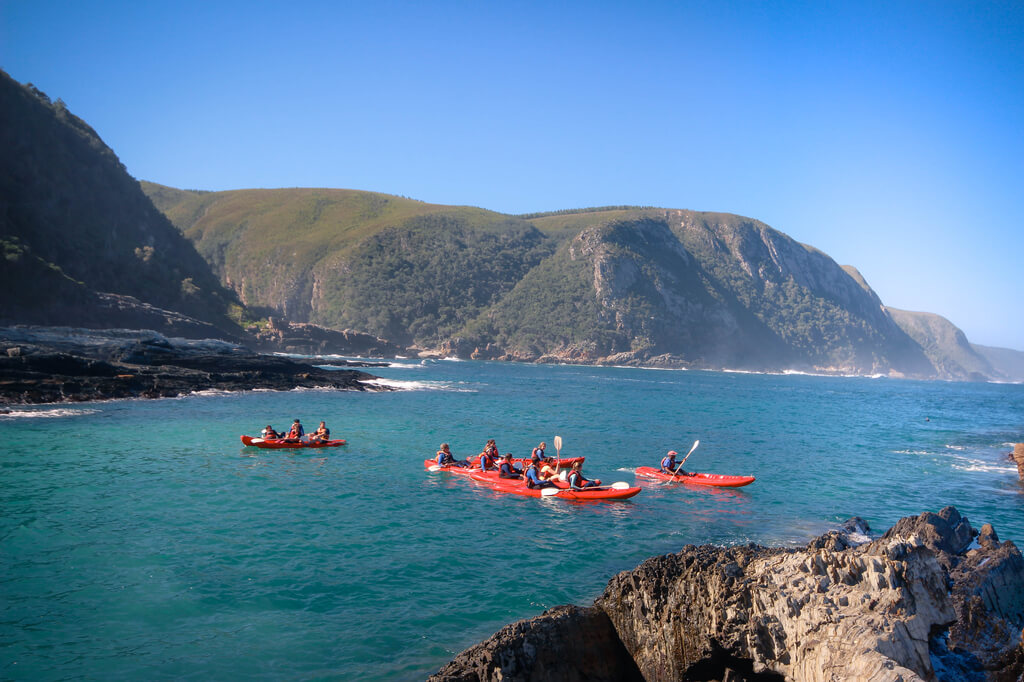 The place was surrounded by tourists from all walks of life. It is so nice to see so many people hear about a beauty like this.

It does however make some of the walks a bit congested. Especially to the Suspension Bridges.

Hoards of buses with people stopping off to stretch their legs.

That being said they did a fantastic job to keep the place well maintained and walks for all types of enthusiast. 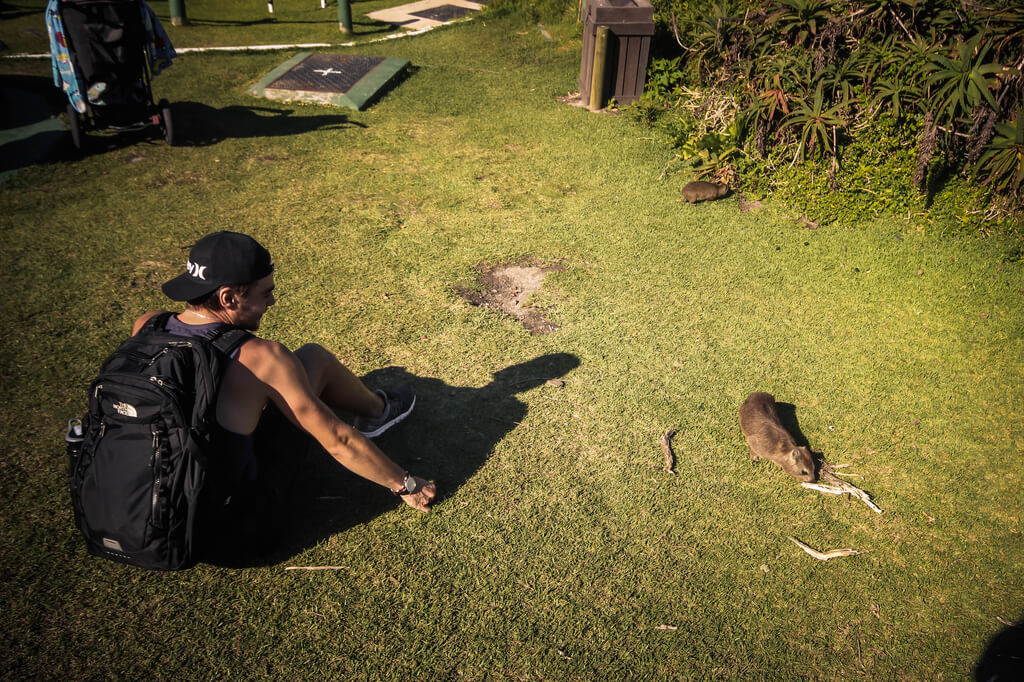 The first walk for us was a brief walk to the Suspension Bridges. This alone is well worth a visit, even if this is the only walk you will be doing for the day.

It is very short but up various stairways in order to walk along the cliff front.

With views of the river mouth, this is truly well worth your time. The beauty of this country can be summarised by just sitting back admiring this with the crisp clear waters, South Africa has to offer. 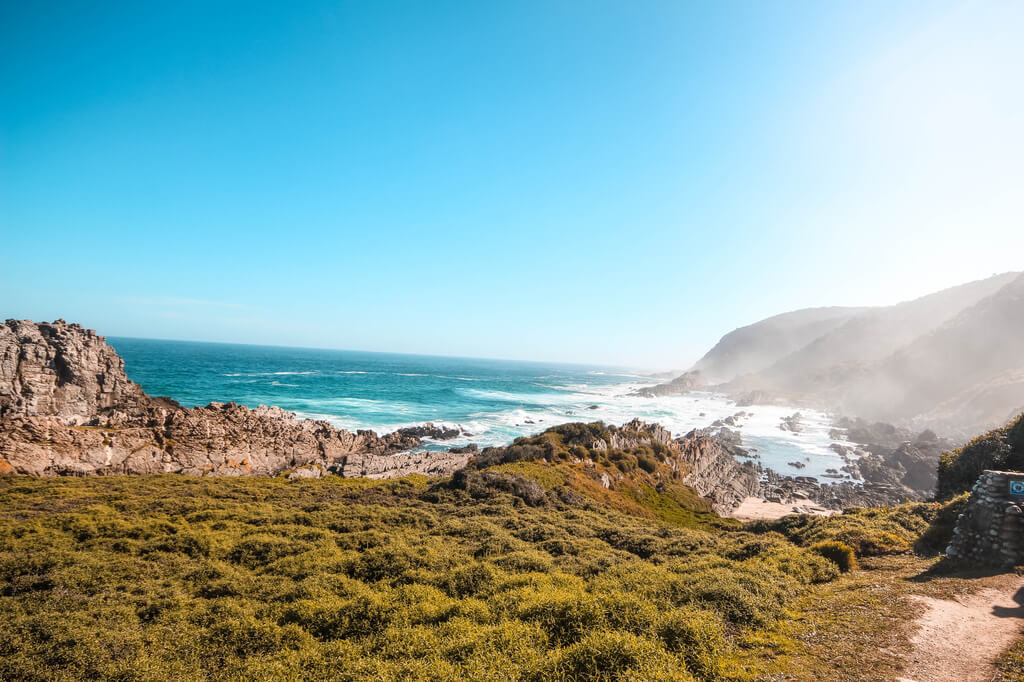 Off The Beaten Track

For us we like to do things differently, and decided to step away from the usual path. Finding an opening we headed out to the rocks to climb the rocks up to the bridge rather than take the usual stairway.

The views from here alone made it well worth our time of day.

As you all well know, we don’t do things in halves. 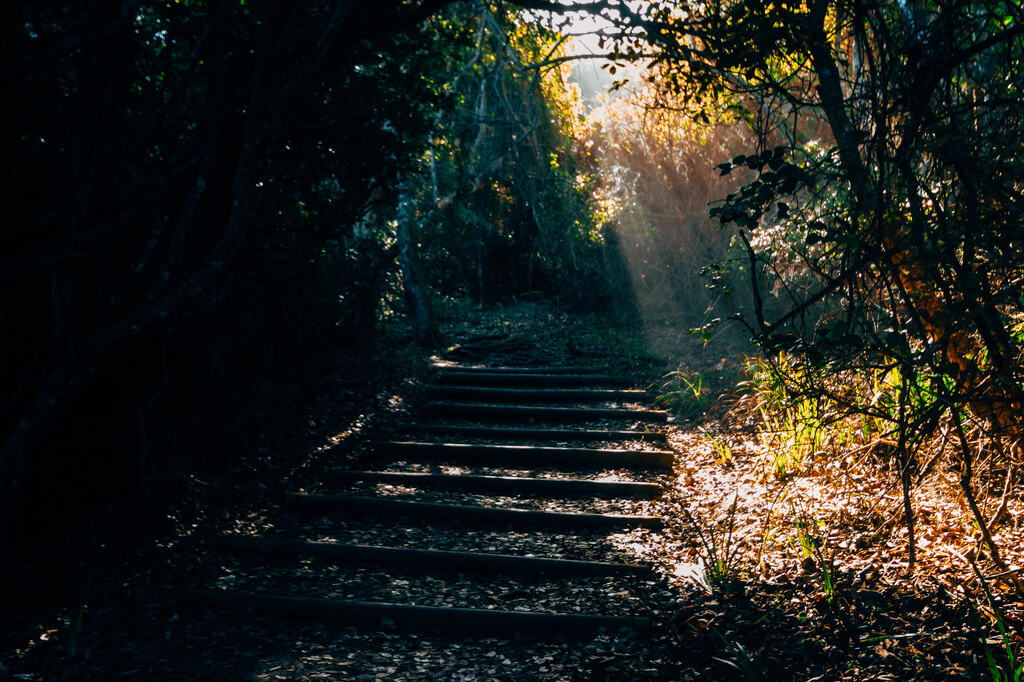 The hike is well maintained with Yellow paint markings on various rocks to prove you are going the right way.

The walk itself is 6km according to their website, however due to the terrain the timing is longer than other longer walks.

The best part about it… The views and the beautiful Waterfall at the end!

More on the hikes here: 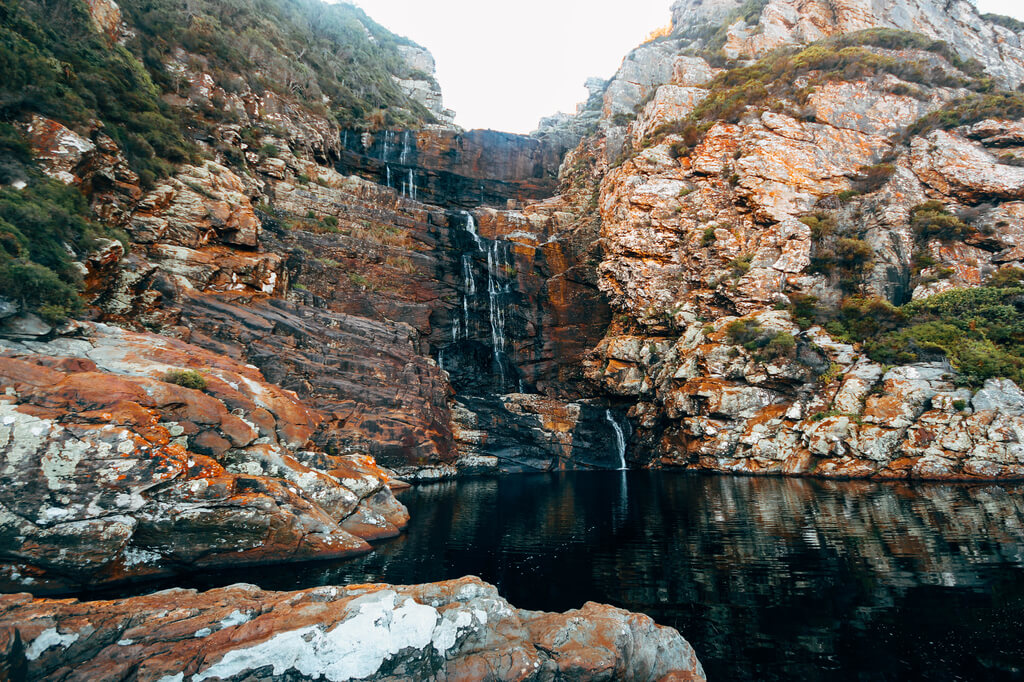 We can understand why the Waterfall Trail can be classed as a strenuous path for most.

Tsitsikamma National Park offers a variety of walks for all the family, so don’t feel if you cannot do this one you won’t be able to do any of the others.

We call it a Path but it isn’t quite a path… You will experience a variety of terrains.

From rock climbing, to a short forest walk, it will put your balance to the test.

However the result from the various obstacles is well worth the hike. Walking across the beautiful picturesque coastline is enough to make us smile. 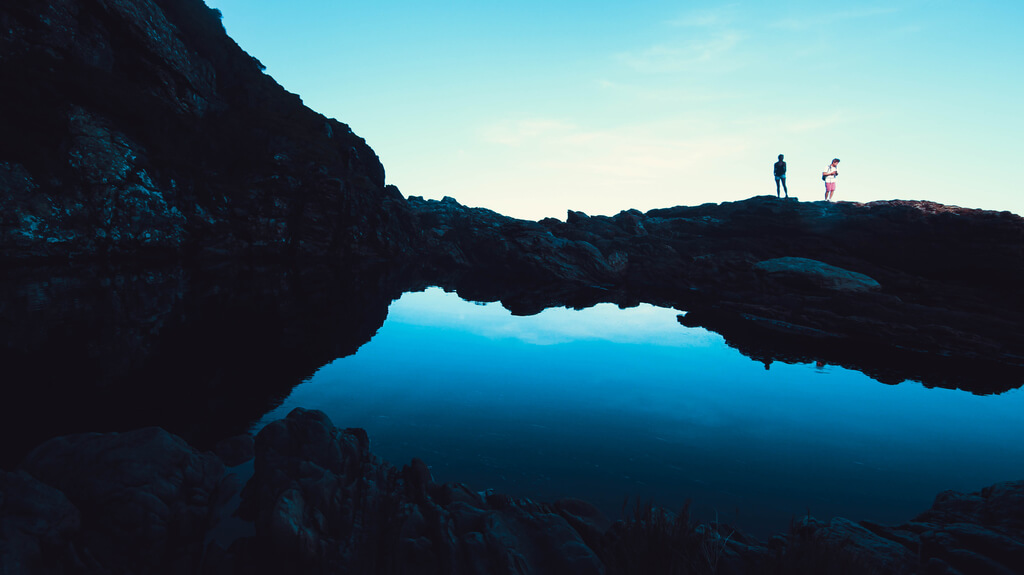 One thing we wish we had planned for was camping. Ok! We confess we don’t live far away, but just picture waking up to a sea breeze. Fresh air, water on the stove, and a beach with water to dip your toe in centimetres away from you?

Does that not sound like a luxury right there!

Next time… This is our plan! 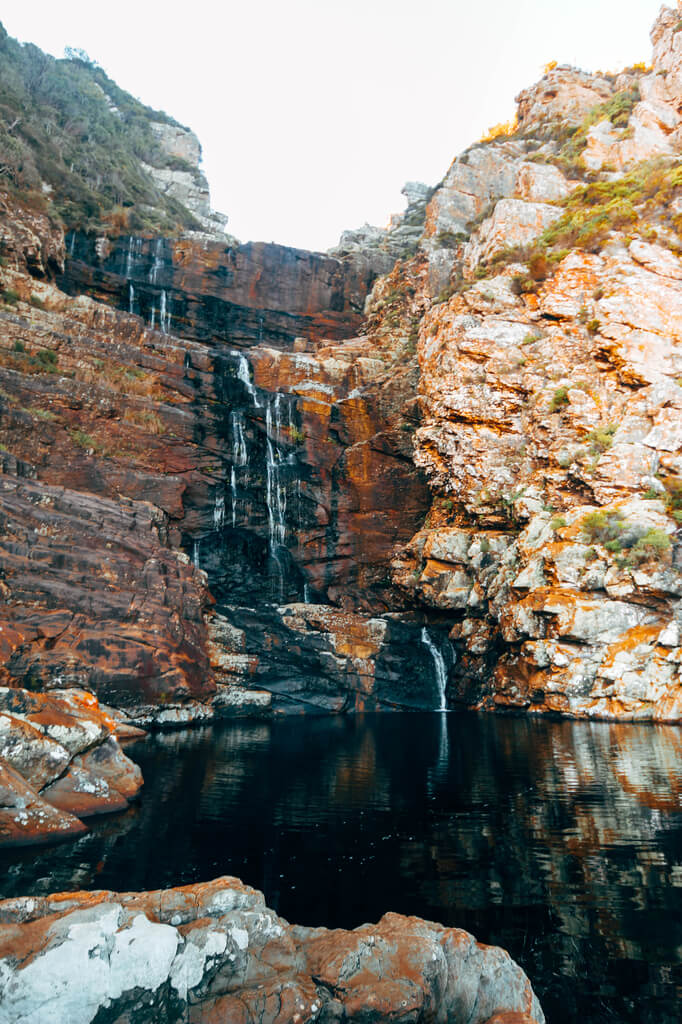 How Hard Is The Hike?

For us it wasn’t that challenging, however we can begin to understand how it can be strenuous on many.

So I guess as a word of advice, don’t expect paths. Its a lot of rock climbing, and in colder conditions, be warned you may slip a few times.

Even in some great Hiking Shoes, I found myself slip several times which could have ended rather nasty if it wasn’t for my monkey arms swinging around. 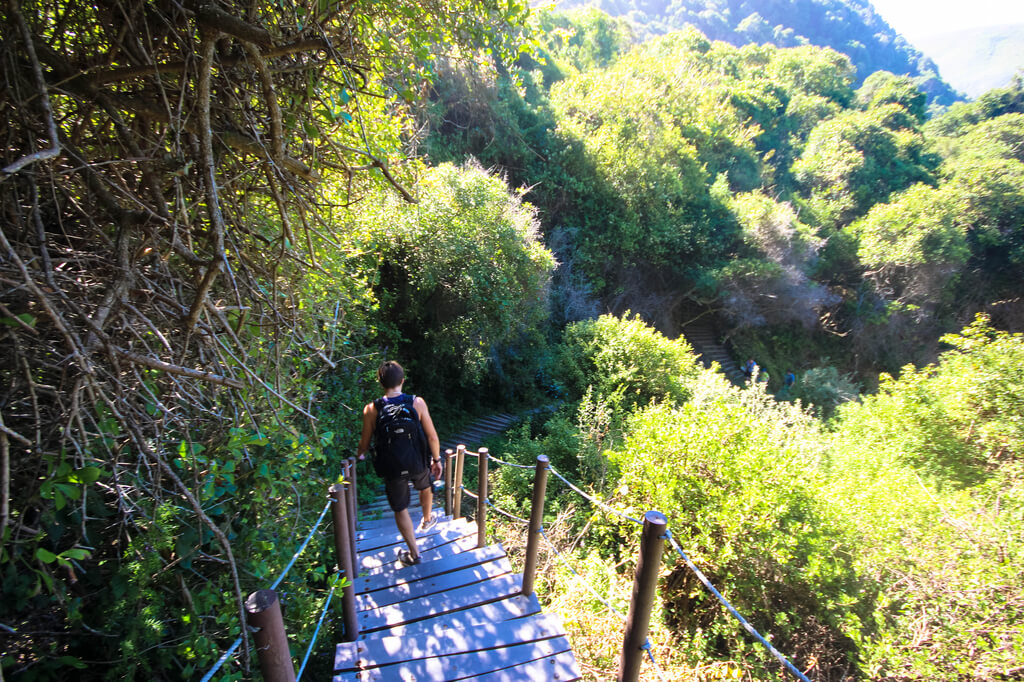 One thing that concerned us on our hike was the fact that it suggested 3-4 hours for the hike.

Still with typical Braai Brothers Analysis we looked at one another shrugged our shoulders and started the route.

With a fast pace we managed the whole journey in 1 hour and 30 minutes… Now beat that!

Sadly it meant pictures weren’t our main priority but we will be sure to return for more fun along this route. 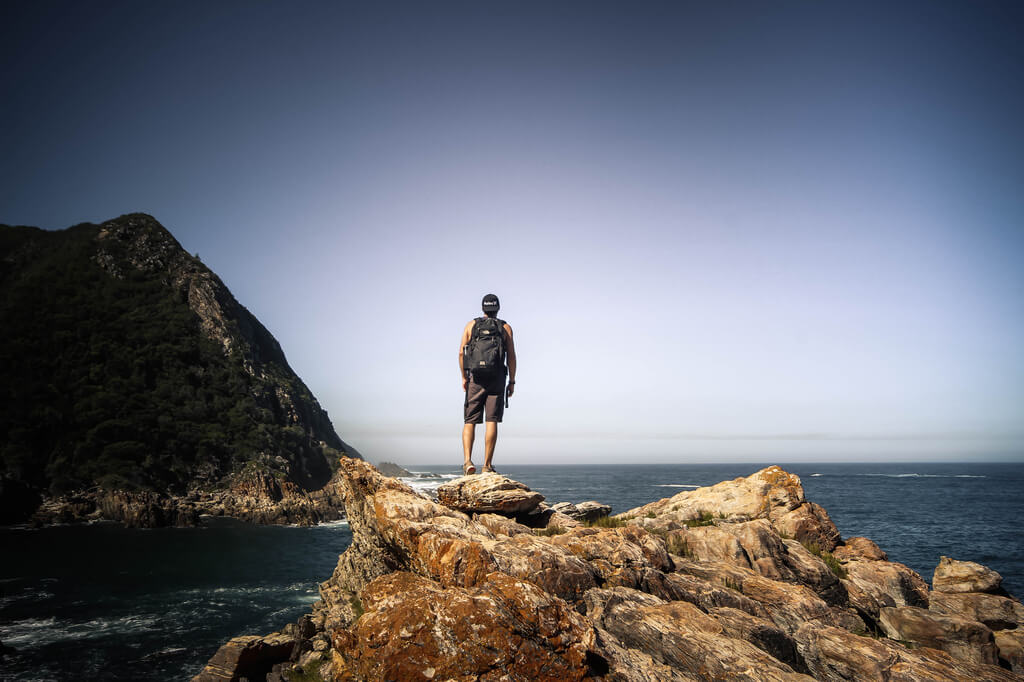 Arrival at the Waterfall was one big highlight. Even with a water shortage the view was incredible.

We weren’t the only people there but we still managed to get some great shots along the way.

If we were to do it again we would have chose a warmer day and swam in the waters, but that is for next time!

It is a beautiful end to an awesome hike. 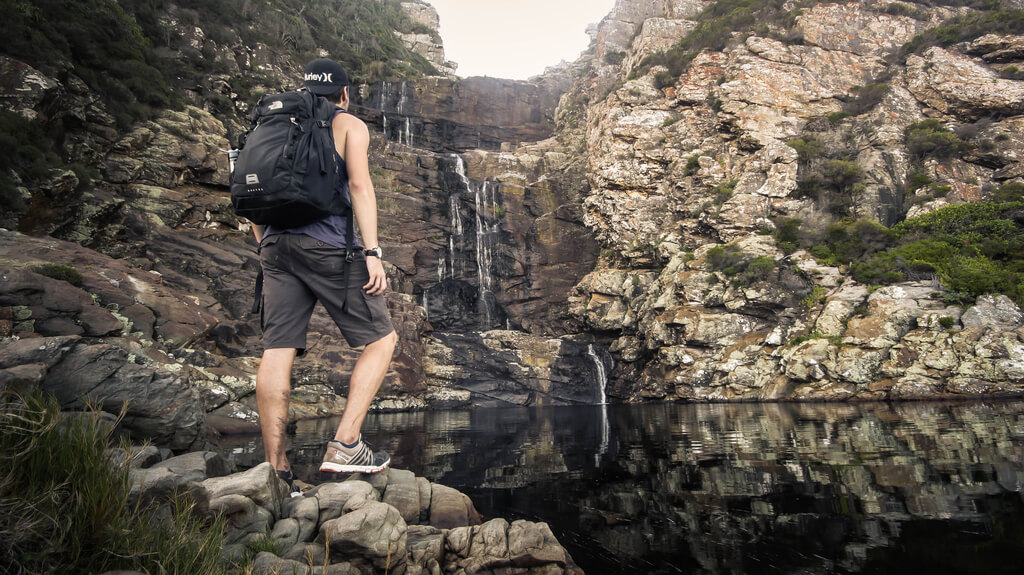 Bush Buck On The Beach

On arrival back at the camp after our achievement, we sat on the bench for five minutes to witness the sun going down.

Whilst doing so we saw the bushes rustle and a buck just casually walk past us without a care in the world.

Grazing in the freshly grown grass we truly could not even begin to describe how content we were. 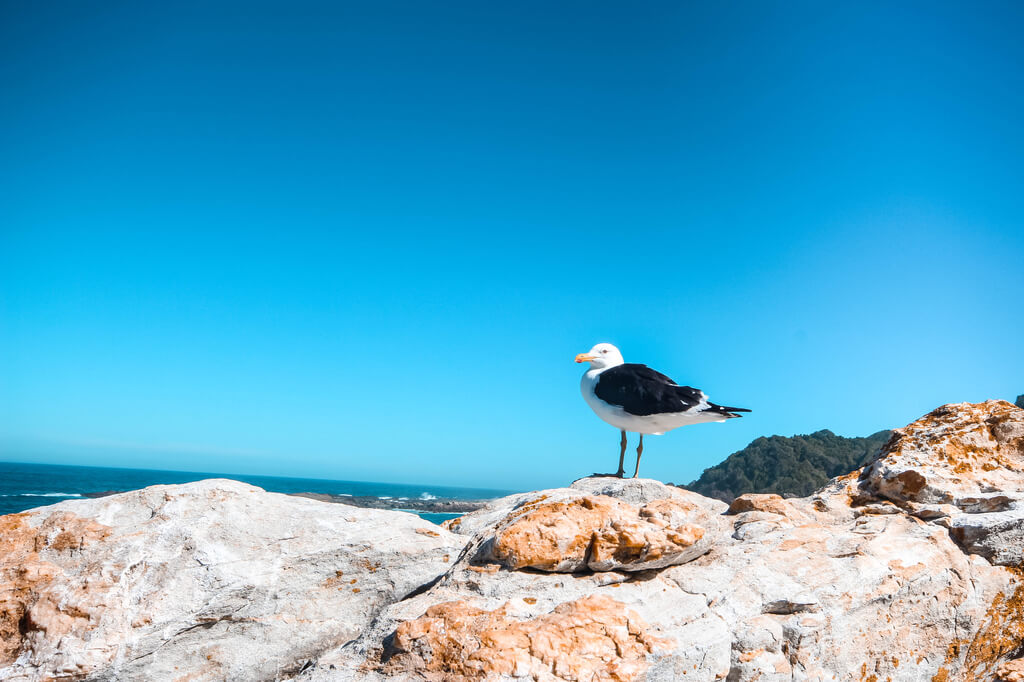 For those looking to visit the area, we would recommend the camping facilities. We sadly did not do it, but how beautiful would it be waking up in the morning to the sea washing against the rocks.

The oddballs who enjoy a bit of luxury, there are National Parks Style Log Cabins, which are facilitated with the basics as you would find in any other National Park Facility.

More of this can be found Here

If however you do go for the day, the suspension bridge hike is easy enough for anyone. There are plenty of steps to climb but doing it at your own pace is well worth it.

Thos adventurous enough to hike the Waterfall Trail… We could not recommend this enough! Get out and do it! 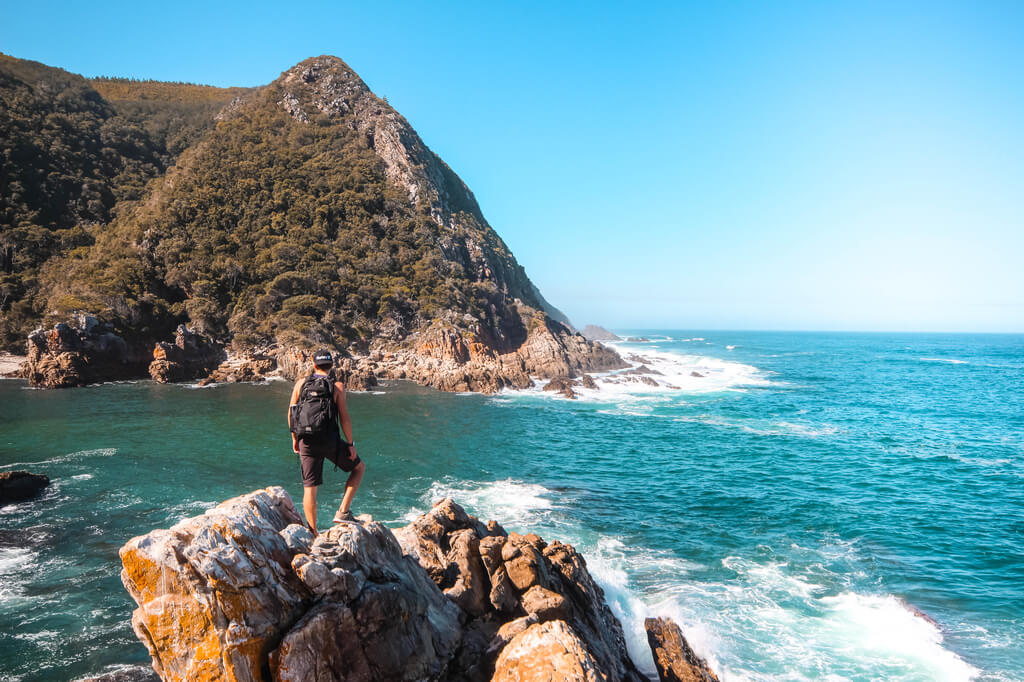